Just like every other Bob Dylan fan in the world, I have been endeavoring to determine exactly how many roads a man must walk down. To this end, I’ve been using passive location tracking for a few years now and have generated a fairly significant amount of data on my movements and travel. Mostly I’ve used Google Latitude, and enabled its optional history feature.

Many people shudder at the privacy implications of this. Personally, I assume my cell phone providers have very similar data on hand already, if not with quite as much accuracy and precision.

I’ve now started looking through the data to see how my movements have changed over time. One really stark difference between living in Seattle and living in Stockholm is my average furthest distance — on any given day how many miles away from home do I make it?

Check it out. This a map of my movements in Seattle on Thursday, September 29, 2011: 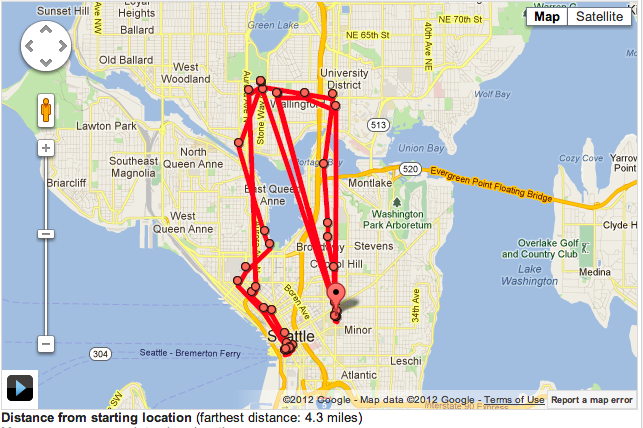 That was a fairly normal Thursday on which I went downtown for work, went back home, and then went out for drinks on Capitol Hill. One cool thing about having this data is that it helps spark your memory — I now remember that exact evening, who I was with, and some of the conversations that we were having. Location is an excellent trigger for that sort of thing.

Anyway, you can see that the furthest I made it from home is 4.3 miles. Most of my days in Seattle seem to have a furthest distance figure of 4 to 6 miles.

Now, here’s a map of my movements in Stockholm on this Wednesday, September 26, 2012: 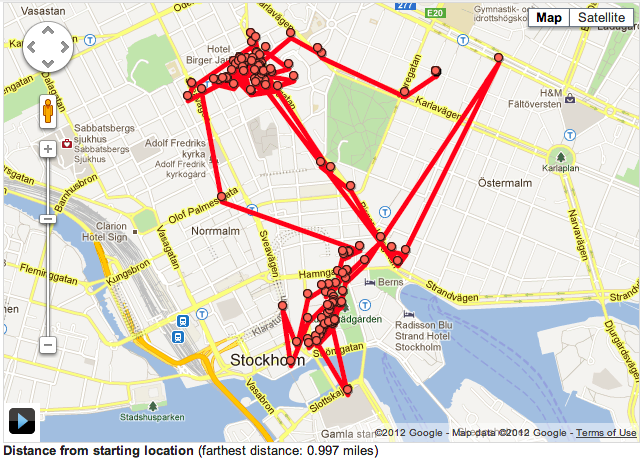 Again, a fairly normal Wednesday. I walked to the office, went to a show after work, and then walked home. The difference, though, is that the furthest I made it from home is only 0.997 miles.

One mile instead of five miles. That’s a pretty significant difference. What makes it especially interesting for me is that I lived pretty centrally in Seattle and had a very enviable commute (15 minutes on the bus followed by 5 minutes on a bike).

The same holds in Stockholm. I live fairly centrally and have a similarly short commute. But the difference is that in Stockholm a short commute is a 15-minute walk, rather than a 15-minute bus ride. This is the kind of thing you can enable when you build for density, and it’s the kind of thing I hope to see become more possible in Seattle as well.

Anyway, just some data that I thought was interesting.